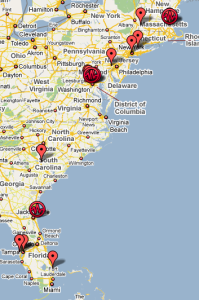 As I was perusing jobs on Rubynow I thought I was seeing a concentration of jobs in Florida, New England, and the Washington DC area. To test the idea a little, I decided to throw a sampling of the recent jobs onto a map (see Ruby on Jobs and Consultancies »). To that map I also added some of my favorite Ruby consultancies:

If you look at the whole (world) map I think you will agree that there is a definite concentration of Ruby jobs and kickass consultancies in the Eastern US. There are many biases at work here of course, especially when it comes to the consultancies I’ve listed. Nevertheless, it does seem like something’s going on here.

I’m intrigued by a few points:

What’s going on down there in Florida? Seems like I see lots of Ruby jobs down there.

What’s up with that DC area. I’d say the presence of Intridea and Viget within what, 10 miles of each other qualifies DC as a hotbed.

Look at that New England cluster. I think there is general awareness a big presence in New York, but the number of jobs in New England surprised me.

What is it about the Eastern US that makes it such fertile ground for Ruby? Is there some bias in the job listings on Rubynow? Or is this simply a reflection of Ruby moving into the enterprise. Is there a particular kind of enterprise that’s predominant in the East and that’s adopting Ruby technology?