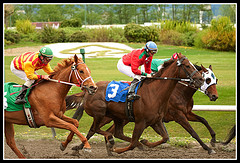 I was going to tell you about Jonathan Ive’s recent pithy pronouncement on focus groups to wit:

"We don't do focus groups," he said firmly, explaining that they resulted in bland products designed not to offend anyone.

But I won’t do that because when I went to Wikipedia to research “focus group” for the post, I noticed that their page had already been updated with the Ive quote. It had been updated on the same day as the original BBC dot.life article. Wikipedia surprises me again with its velocity.