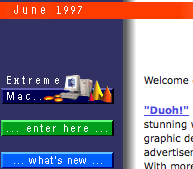 What’s so cool is how unappetizing, especially Veerle’s, early sites are. To be fair, hers was perpetrated four years before Jason’s. And those were four big years too. But my intention is not to criticize.

What strikes me about this exercise is that it shows once again that there is no such thing as overnight success. You see in the decade-or-so of work a progression from ugh/ho-hum to pow! Take heart. Keep working.